From its dazzling water colour style visuals to its intriguing isometric view transistor is a sight to behold.

It’s a beautiful and touching sci–fi experience with a layered combat system and a myriad of ways to play.

Throughout its campaign I felt a wealth of emotion and intrigue that made me want to delve deeper into the cyberpunk world of cloudbank and uncover the dark mysteries that surrounded it.

The second of indie studio Supergiant’s offerings – their first being bastion, Transistor is a Tron esque single player action rpg .

You are thrust straight into the action from the get go.

The game encourages you to learn as you play with very little handholding through its deeply unique gameplay and enigmatic story.

You take control of Red, a charming singer in the fictional city of Cloudbank.

Red has become entangled in a strange conspiracy which has resulted in her losing her famed voice.

She traverses the world armed with a mysterious weapon called the transistor found in the body of a dead man.

The transistor holds the key to Red’s voice but also holds the consciousness of the man she found it buried in.

Over its six-hour campaign you will be hunted relentlessly by robotic enemies known as ‘The Process’ who are in pursuit of the Transistor.

The story is smartly written featuring subtle nuances throughout never quite setting itself out in black and white leaving you to uncover the secrets the city harbours.

But it’s the relationship between Red and the man inside the Transistor which really shines with fantastic and engaging voice acting.

The relationship feels real and captivating despite the fact Red cannot talk and can only use her actions to communicate.

It’s this relationship that will remain throughout as you try to piece together what happened and it’s what stayed with me long after the credits had rolled.

Another interesting note is the clever use when playing on the PS4, of the dualshock 4.

Your controller will light up in sequence with the voice inside the transistor and the sound can be heard from the internal speakers.

This feature may sound gimmicky at first but I found it actually added to the immersion of the game. 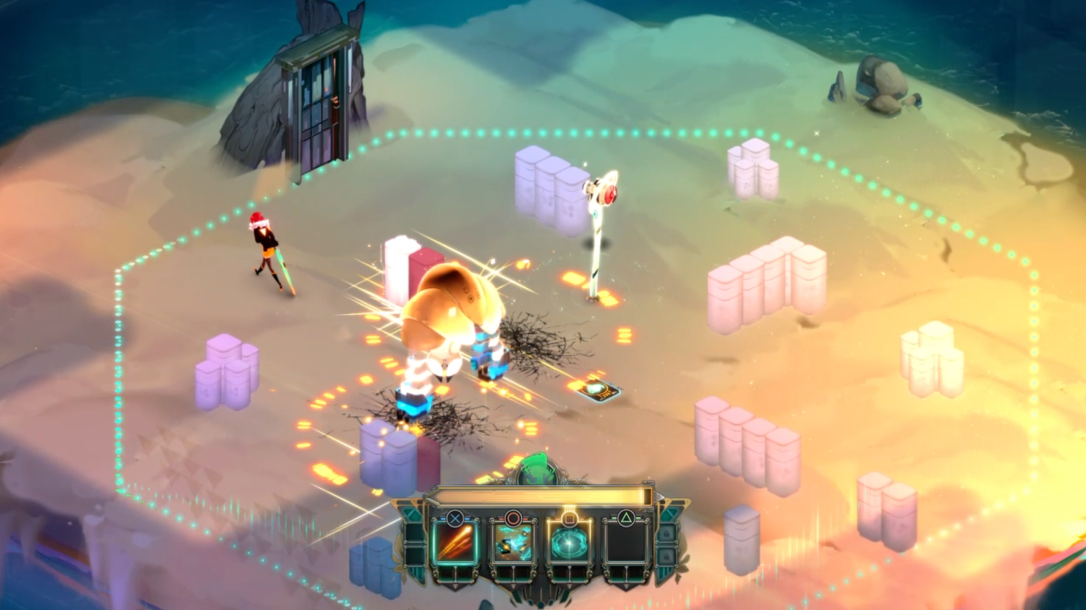 I found the gameplay refreshing and rewarding. I never became frustrated when I bite the dust but rather, excited to learn from my mistakes and try new tactics.

The game feels almost puzzle like in terms of its gameplay. Its a mix of real time combat and a planned attack known as ‘turn’.

Turn allows you to freeze time to plan your attack and enables you to backtrack and change your mind lending itself to lots of experimentation however when your actions are locked in there’s no going back.

Along with this you have what’s known as functions – and there are 16 in total.

Each function costs memory which you can upgrade as you level up through combat encounters enabling you to equip more functions at any one time.

Functions are varied and all have their own uses from normal attacks to spawning help in battle.

Functions can be mixed and matched to create powerful combinations. They can be used actively, passively or to strengthen another skill in your arsenal.

This gives this game a key element of replayabiltiy coupled with the fact using a function unlocks small parts of the story via the files attached to it.

These extra bits of story feel extremely detailed in their own right leading you to want to discover them all and learn more about cloudbanks inhabitants.

You can even full respec your character at any checkpoint making the possibilities in combat almost endless.

There is also an area to be found behind some of the doors in which you can play numerous challenges which supplies players with extra content and interesting ways to improve and test your skills.

If that wasn’t enough you can make the game more challenging through the use of limiters which act as debuffs but reward you with more experience for your trouble.

The only issues I encountered on the odd occasions were parts the environment obscuring my character and causing me to do a bit of guesswork in the heat of battle.

The mix of combat really makes it shine and a joy to play through as its combined in such a well thought out way that each encounter feels new and refreshing. Enemies are unique and environments are well detailed and the character design is visually stunning from reds fiercely auburn hair to the glow of the transistor.

With red having lost her voice a lot of the story is told through the visuals and these artful moments are immensely powerful.

For example, there is a point in the game when red steps up to a microphone and this transports her back to before this all began and the original soundtrack shines through.

Even four years on this game’s art design still looks phenomenal coupled with it eclectic score it is one you won’t quickly forget.

When the credits rolled at the conclusion of Transistor and the final score kicked in I immediately wanted more of this world – I wanted to go back and replay it and discover every detail of the world I had become so immersed in.

From its visuals and sound to its refreshing combat system it’s not only an enjoyable game but a one that has heart and really stands out.

It evokes emotion and intrigue at its conclusion and is a game I will no doubt appreciate for years to come.

You can purchase Transistor on PS4, PC and Nintendo Switch now.